Regional Strike and the Inca Trail

The Inca trail winds across the Andes Mountain Range to the mysterious Machu Picchu. It is one of the world’s best known classic treks but it is much more than a great hike. It is a portion of an incredible network of architecture and engineering tying the Inca Empire together.

That is why we had to book this trail 6 months in advance because it is so popular. We booked to start tomorrow, the 26th. The Peruvian government has set a limit to the amount of people allowed on the trek daily. So if you want to do the classic trek you have to book way in advance. There are a few alternative treks though which I have heard are also nice.

I’ll be able to tell you more about this legendary trail once we have done it. We are looking forward to walk in the footsteps of the Incas while experiencing the beauty of the ever-changing natural scenery.

It will be quite a challenge and I hope our ordinary training shoes will suffice. I also hope it won’t be too cold and that the weather channel is wrong about the predicted rain. I’m excited and a bit nervous but we will deal with challenges as they arise.

The first minor scare is that we received an email late last night from the company we are doing the trail with, Llama Path. It read:

“There is a strong likelihood of a regional strike on the 26th and therefore we are putting a contingency plan into place which would mean that you would leave tomorrow night at 10pm, camp near the starting point of the trek and then be able to enter when you should.”

I don’t think we need to be too alarmed by this. It just sounds more hectic than what it is. Camping an extra night is not bad. They will let us know for sure this afternoon at 5pm when we have our pre-trek meeting. 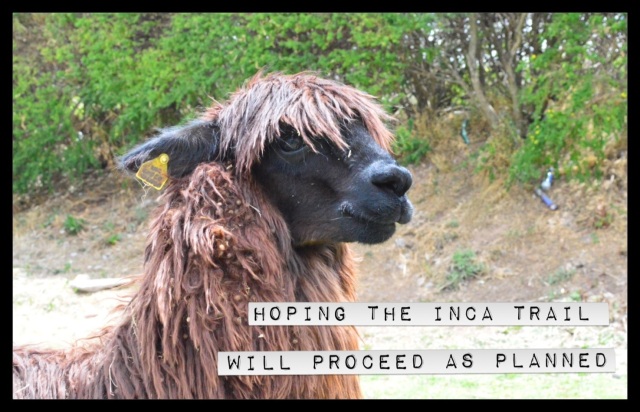 This entry was posted in Peru, South America and tagged inca, Will a strike affect the Inca trail. Bookmark the permalink.

1 Response to Regional Strike and the Inca Trail