Our stay in Huacachina 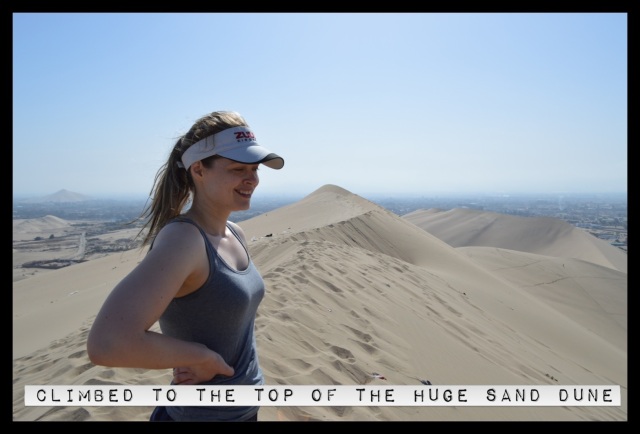 It’s amazing but also funny, we are in Peru, at an oasis, in a desert we didn’t even know existed just a few days ago. It is so unusual it almost feels like a dream.

We have spent two days in the beautiful village of Huacachina. It’s built around a lake in the desert of the Ica Region. Huacachina is known as the “oasis of America.” The name is a combination of two words; huaca (cry in Quencha which is a language spoken by the indigenous ethnic groups of South America) and china (woman in Quencha) so basically it’s crying woman.

According to the legend a beautiful, young Inca princess formed the lagoon with her tears while crying for her lost lover. She apparently still lives in the lagoon occasionally tempting young men who swim there. (There are a few variations of this story though.)

Huacachina certainly is magical. There are a few restaurants around the lagoon with good food and cocktails. Guests at our backpackers,Banana Adventure, were partying till late last night. We ate at one of the restaurants with our fellow German travelers. Have a look at the photo to see what the name of the place was! And that’s the real name!

Marc got us to climb to the top of the huge sand dune this morning. It was very exhausting going up but awesome running down. On the other side of the dune we saw a little informal settlement surrounded by kilometers of sand.

Tourist come to Huacachina to do sandboarding and dune buggying. We did just that yesterday! It was so cool! (Will put up that post soon).

This entry was posted in Peru, South America and tagged Huacachina. Bookmark the permalink.

1 Response to Our stay in Huacachina